A sermon from a grieving father on Father’s Day

On this Father’s Day, Patrick dared to begin a several-week sermon series on one of the most terrifying stories of the Bible: the binding and attempted sacrifice of Abraham’s son Isaac (read it here). Each week, he plans to tell the story from a different perspective: Abraham’s, Isaac’s, and God’s—as well as those who are silent in this story, Sarah, Hagar, and Ishmael.

In this first sermon, Patrick dares to ask –

“Is Abraham a grieving father helpless to save his son? Or is he a murderer whose allegiance to God blindly excludes all other loyalties?

Is he an exemplar of faith, or is he a relic of an older and crueler vision of God?”

These questions are particularly daunting, because this marks Patrick’s first Father’s Day since the stillbirth of our sons, Ezra and Leo. As a grieving father himself, Patrick peers through the eyes of another father who must face the prospect of losing his son.

And in the end, he wonders with Abraham, how do we go forward and face a life that requires dreadful, trembling risk?

Join us on this journey as we, like Abraham, risk to love in the face of loss.

To some, Abraham is a hero, a beacon of faithful obedience. God asks him to do something, and he does it, even if it breaks his heart. Perhaps he trusts that God will intervene and save his son. Or maybe he knows that the balance of faith is measured, not in the good times, but in the hard.

To others, Abraham is a murderer, whose blind allegiance to God leads him to forsake morality. He is a despicable father who never once pleads for the life of his son. He is a relic of an older and crueler vision of God—not our kind of God, not a God of infinite love, but a God who toys with humanity like a cat with a mouse.

When I read this story, I can’t help but read it as a father who has cradled in his arms his two stillborn sons, whom I begged God to save. As such, I at once hate this man who would so endanger his precious child’s life and love this man who trusts God even as he faces the horror of losing his son.

Perhaps no one has better captured this duality of Abraham than the artist Rembrandt.

As a young man, Rembrandt painted this scene with colorful drama. Abraham leans over his son’s sprawled, exposed body, his hand violently gripping his son’s face, silencing his cries for help, a dagger hovering in the air—an act of murder urgently stopped by an angel with small, faint wings and a look of reproach. 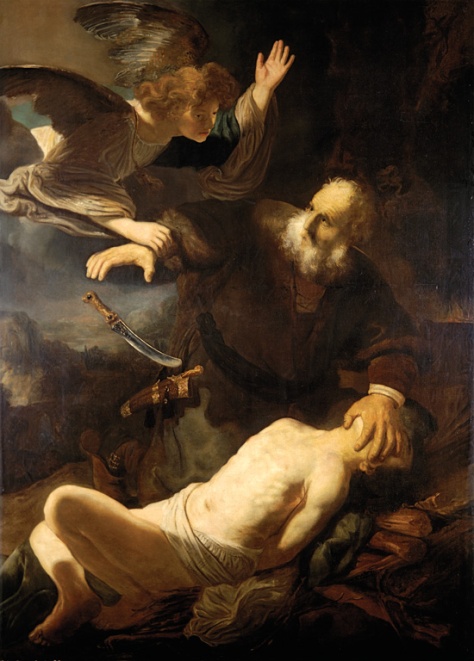 Twenty years later, now an old man, now a father who had seen three of his children die in infancy, now a widower with an only son, Rembrandt etched a very different version of this story.

This time, Abraham kneels with his son, cradling him in his arms, his hand gently, mercifully, covering his eyes. And behind him is an angel who hugs Abraham tight and whose sweeping wings surround and protect a grieving father. The angel looks at Abraham with sympathy and calm. But what you notice most are Abraham’s dark, cavernous eyes. The great Ellen Davis describes the scene: “He seems not even to see the angel, nor does he look at the boy. He has the unfocused stare, the ravaged expression of someone who has survived something unspeakable.” 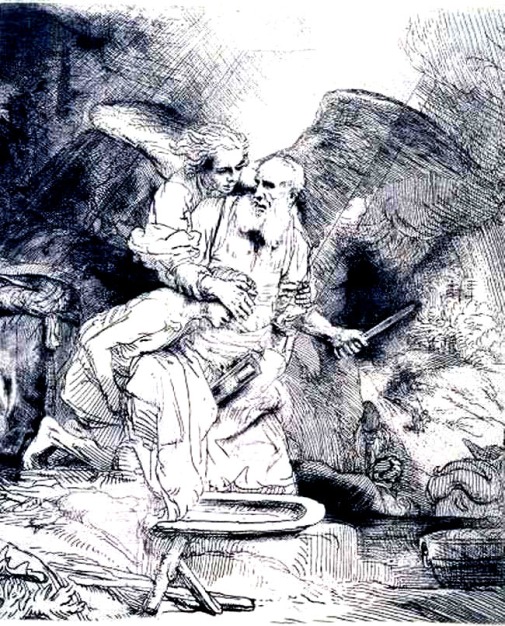 To understand the man caught between these two works of art, we have to understand that this is a man who’s been holding onto an impossible dream for 25 years. At the age of 75, Abraham (who then went by the name Abram) gave up everything for God. He left behind his country, his family, everything he knew and loved, because God asked him to, because God made a promise that day to make a great nation out of Abraham. God promised to bless and protect him. For 25 years, Abraham and his wife Sarah wandered deserts, facing famine, war, and infertility. Over and over again, God told Abraham not to be afraid. Over and over again, God made promises. And still, no children, no home to call their own.

Sometimes Abraham and Sarah got fed up with God’s promises and tried to make it on their own. But always they came back to their love for God, and always God loved them.

Then, finally, God gives them a child, a boy whom they name “Laughter,” Isaac. As the years pass, Abraham and Sarah watch Isaac grow and play and learn. These are the happiest years of their lives. And then, it all comes crashing down.

Isaac will die, God says. And in that moment, Abraham’s world comes crashing into ours. A world where promises are broken. A world of cancer, depression, suicide, accidents, war, overdoses, still births. A world in which life requires a dreadful, trembling risk, and we’re not sure it’s worth it.

In this story of Abraham, I see a man bent beneath the weight of his long, disappointing life. I see a man who loves his son, who walks tenderly with him, who clings to the hope—delusion?—that everything will be OK, who insists that God must be better than this and yet wonders if God really is.

But what the text offers us instead is an intimate portrayal of a father and son walking together. I imagine Abraham rising in the morning, hugging his son, and placing him gently on a donkey. For three days, they linger, their hands interlocked, telling stories at night over a camp fire. For three days, Abraham looks at his son; he can’t take his eyes off him. He’s so beautiful.

When Isaac calls out to him, Abraham replies, “Here I am, my son.” The same words, “Here I am,” that he had spoken when God had called out to him. These three little words contain so much love—for God and for Isaac.

The miracle—the stunning breach of nature—is that Abraham goes on loving. He answers both Isaac and God with those vulnerable, bleeding words, “Here I am.”

Such a man is neither a monster nor a pillar of faith. He is simply a dad.

To bring a child into this world is, inherently, to expose them to danger and pain, all on the hope that they’ll get to live a good life, the promised life.

All love in fact—whether as a parent, or a friend, or a spouse, or a follower of Christ—is an immense risk. It is the vulnerability of being present with those whom we know could be taken from us.

It’d be so easy for us to stop loving each other and God, so easy when the world is so hard. It would make the journey hurt less.

And so I’ve been wrestling with this question: If I could go back in time and not have my sons Ezra and Leo grow in Jenna’s womb, if I could spare them their death, if I could spare Jenna and me this grief, would I? If I had known then what I know now—that even Jenna’s life would be risked—would I have pursued a different course? Unlike Abraham, I cannot answer that question unequivocally. But with a history of four miscarriages, Jenna and I did know some of the risks. And still we gave Ezra and Leo life. And while it ended in sorrow, we too got to walk with them. We got to see them every week on the ultrasound machine. We got to see Leo kicking Ezra. We got to see them sleeping and doing somersaults. We got to know them and their personalities. We got to read to them and play music for them. And when they died, we got to hold them, talk to them, pray for them, cry over them, and trust that they know the peace and joy of life everlasting.

Was it worth it? A thousand times yes. I would walk it over and over again, through the pain, up Mount Moriah, just for the chance to walk with them.

God asks us, as God once asked Abraham, to face life—even its pain—openly and vulnerably. Because as long as we do that, as long as we walk together, trudging up Mount Moriah, down that long hospital corridor, love persists. Love rings out. Love saves.

The risk and sacrifice of life are worth it, because of those moments along the way, because of the tenderness with which Isaac says, “Father,” and Abraham says, “My son.”

So hear me: what brought Abraham up on that mountain wasn’t just faith. It was something greater than faith. It was the one thing, the only thing, that in the end matters. The only thing that survives this life. Love. The love of a father for a son. Abraham for Isaac. God for Abraham. A pastor named Patrick for Ezra and Leo. A father’s sacrifice. A father’s love. The riskiest of things. And, when true, the best of things.

To other fathers who are grieving on this Father’s Day, here is a beautiful tribute in honor of you. May you feel as much peace and comfort as possible today, and may you know that, even today, you are not alone.

(TRIGGER WARNING for child loss. Only watch this if and when you feel ready…)

2 thoughts on ““A Father’s Sacrifice””

View all posts by patrickheery